An upstate company has created technologies that are speeding eCommerce order fulfillment for several well-know companies across the US.  FastFetch Corporation, located in Pendleton, SC, has installed its eCommerce order fulfillment solutions for nationally known companies including GNC, Stanley Black & Decker, Saddle Creek Logistics, and Snap-On Tools as well as SpartanNash, a 3PL who does picking for more than 14,000 Dollar General stores.  FastFetch’s technology is also used to supply parts to work cells on automotive assembly lines.  Here, it is essential that parts are supplied quickly and in exactly the right sequence for vehicles in progress on the assembly line.

FastFetch was recently recognized of the 5 most innovative supply chain companies among across the US in competition for the 2018 Supply Chain Innovation of the Year Award presented by the Council of Supply Chain Management Professionals (CSCMP) and SupplyChainBrain.  The other 4 winners were Intel, Pfizer, Schneider Electric, and Kansas City Railway.

The explosive growth of eCommerce during the last decade has drastically changed the way customer orders are placed and fulfilled.  Most products are not shipped directly from the manufacturer to the customer.  Rather, products from manufacturers are transported to distribution centers that typically maintain a wide assortment of products from multiple manufacturers in inventory.

When an order is placed, the required products must be located in the distribution center, the required quantities of each item must be retrieved or picked, and, finally, the picked items are placed into an appropriate container for shipment to the customer.  With the emergence of eCommerce, distribution centers began to experience a dramatic upsurge in the number of orders per day, but with fewer items per order.  The upsurge in on-line ordering together with the expectation of shorter and shorter delivery times has placed new demands upon distribution centers to handle products in a more efficient and cost-effective manner.

While automated systems are capable of supporting some order picking activities, most order fulfillment strategies in use today rely upon substantial human labor.  According to Dr. Jack Peck, Founder and President of FastFetch, “Decision makers are faced with a variety of options for improving the speed and accuracy of order fulfillment.  Key considerations are projected picking speed, capital expenditure, operating costs, fault tolerance and return on investment.  An equally important consideration is the flexibility of the technology to be scaled up or down to accommodate changing demands.”

Several order-picking technologies were already in widespread use in 2006 when FastFetch was launched.  The motivation that fueled FastFetch was the idea that the best features of voice picking, light-directed picking, and barcode scanning could be blended into a singe system that would be much more versatile and would offer substantially better performance than any system based on a single technology.  The idea of combining different supporting technologies into a single system—pioneered by FastFetch—is now referred to in the distribution industry as a multimodal system.

FastFetch is also known for integrating highly effective artificial intelligence techniques into its products to improve the efficiency of order fulfillment processes.  As explained by Garry Harper, Vice President of Sales and Marketing at FastFetch, “A particular distribution center might have several distinct order fulfillment needs requiring different strategies and technologies.  The FastFetch technologies are sufficiently flexible to be used as building blocks for assembling distinctly different order-fulfillment methods— using an appropriate mix of voice, barcode scanning, and light-directed techniques.” 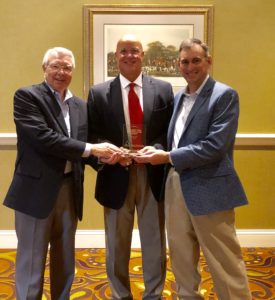 Recognition by CSCMP and SupplyChainBrain

As one of the five most innovative supply chain systems in the US, as recognized by the Council of Supply Chain Management Professionals in its 2018 Supply Chain Innovation of the Year Award, FastFetch was recognized for creating and implementing an agile order-fulfillment strategy for BuySeasons, a major eCommerce supplier of costumes and party supplies located in New Berlin, WI. In addition to its own eCommerce customers, BuySeasons also fulfills costume orders for Walmart, Amazon, Target, and JCPenny.

Prior to adopting FastFetch’s order fulfillment technology, BuySeasons was employing a modern voice-picking system.  The performance of the voice-picking system was inadequate to keep pace with the growth in BuySeasons’ order volume.  Additionally, the time required to train new workers on the voice system further contributed to low productivity because BuySeasons relies heavily upon temporary workers during their busiest season.

BuySeasons made the decision to abandon the voice-picking strategy and replace 100 voice-picking headsets with 40 batch-picking carts employing FastFetch’s multimodal picking technologies.  Adoption of the FastFetch technology more than tripled the speed of order picking and enabled a 64% increase in worker productivity across the distribution center.  As explained by Joe Plassmeyer, BuySeasons’ Director of Operations, “During the last peak season, we were able to ship 43% more orders with 12% less labor.” 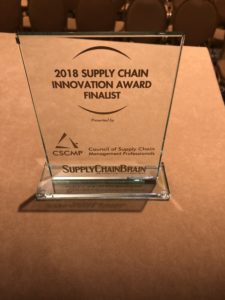 The winner of the 2018 Supply Chain Innovation of the Year Award was revealed in the closing ceremony at the CSCMP Edge conference in Nashville, TN last week.  The winner was Intel who was recognized for developing artificial intelligence and cognitive computing tools to help make sense of vast amounts of unstructured data as might emerge from modern supply chains.

Jack Peck placed things into perspective when he said, “We were pleased to be in the company of the outstanding contenders for the 2018 Supply Chain Innovation of the Year Award.  We are delighted that our order fulfillment solutions have been adopted by some of the top companies across the US, and I greatly appreciate the entire FastFetch team for creating the technologies that led to our recognition by CSCMP and SupplyChainBrain.”